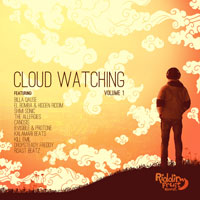 Known for its adventures in the realm of bass music, the Riddim Fruit label crosses the threshold of the chill-out room with Cloud Watching – as if you’d expect anything else from a cover depicting a bloke stood on a hill staring at a paisley-ish sky or a hippy title like that, anyway. If this leads you feeling like we’ve entered nineties downtempo breaks territory you’d be right. And wrong. Firstly, unlike the majority of nineties downtempo breaks albums it’s not like you pay for three decent tracks and a load of filler – consistency is the name of the game here. Secondly, you don’t pay for it at all as it’s completely free to download – doesn’t seem fair somehow. Thirdly, it’s not downtempo breaks as the nineties knew them since the bass wobble has followed through the door and onto the sofa too. Less a revival than a reboot then. The likes of The Allergies, Shimi Sonic, El Bomba & Hidden Riddim and DJ Roast Beatz turn up to show their mellow but particular props go to Billa Quase for a laid-back Cumbia-breaks-wobble effort and Kill Emil’s chilled skank-hop. Perfect twenty-first century hangover music. And I should know because I’ve got a hangover right now. Ghetto chill anyone?
FREE DOWNLOAD Cloud Watching HERE

The Allergies – This Is Just a Ride (snippit) by TheAllergies