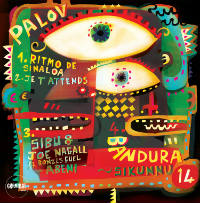 As the planet suddenly feels less safe than it has done since 9/11 and the ignorant, with tedious predictability, have been manipulated by rich and powerful bullshitters into scapegoating anyone ‘foreign’ or unlucky enough to be on benefits instead of, say, the ever so slightly more cuplable rich and powerful bullshitters, it may well be that you feel the need for something a bit cheery in your earholes. Lucky that Carnibal Records have chosen this moment to reappear with their four track Carnibal Records 014 EP then. First up is Palov with the resoundingly joyous Ritmo De Sinaloa followed by Sibu & Joe Nagall ft. Bonze’s Fuel with their afro-tinged Abeni and Bandura‘s Sikkunnu which might start out all traditional and Indian but soon gets all modern on your ass. But that’s only three tracks right? Right! That’s because Palov squeezes a second cut in before he passes the baton – the excellent uptempo shuffle of Je T’Attends which makes nifty use of a cover of Charles Aznavour’s classic of the same name.
(Out 30 June on Carnibal Records)