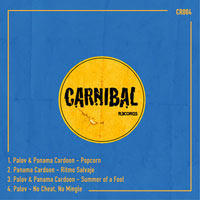 The Carnibal cabal step up their activity here delivering Vol. 4 of their latin breaks series (which actually came out at the end of May) before the dust has even settled in the wake of mid-May’s Vol. 3. Time was when I would receive PR for a release a couple of months before it was due to generate ‘buzz.’ Then some marketing bell-end somewhere must’ve realised that ‘buzz’ has a bell-curve and generating it too early results in premature ‘buzz’ and before you know it you’ve effectively shot your publicity load before – er – release date. And the end result? Everyone who loved your musical miracle has forgotten about it by the time it’s on sale. Bugger. Nowadays of course it’s swung entirely the other way and I’m lucky to get PR a week before a release and often not until the day of a release or even after. In this case, a fortnight after. A fortnight after!? Have Carnibal hit on some crazy new post-release buzz strategy? Have they bollocks. A more likely answer is that they’re having too much fun at their burgeoning latin breaks party as increasing numbers refugees from the cheesier and/or dubsteppier excesses of ‘ghetto funk’ arrive.

004 is a strictly Panama Cardoon and Palov affair with two joint tracks and a solo track each (including a version of Gershon Kingsley’s moog groove Popcorn and cumbia cut Ritmo Salvaje) but it’s the two vocal cuts which party hardest. Summer Of A Fool’s ragga-sampling latin banger will have them all hitting the dancefloor and the woozy summer groove of the MC Lyte-sampling No Cheat, No Mingle will keep them shaking it til the break of dawn.
(Out now on Carnibal Records)