VARIOUS: A Little Something Radio – Music From The Modern Soul Underground (Compiled by Diesler) (2015) 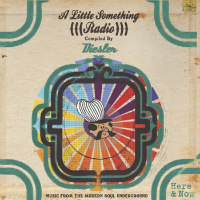 Anyone with half an ear on the music industry knows that in December, ’tis the season to be silly or alternatively, ’tis the season for a freebie and often both at the same time. When you get to January on the other hand, ’tis the season for a compilation – some free, some not. Admittedly that doesn’t roll off the tongue quite so easily but it has this characteristic in common with the title of A Little Something Radio – Music From The Modern Soul Underground) whilst retaining the virtue of telling you exactly what you’re going to get. A bit like the title of this thing that Diesler (for it is he) has put together – to wit: fifteen tracks selected to show the multifarious nature of the modern soul underground. Expect therefore, dirty funk (Third Coast Kings), big band funk (The Gene Dudley Group’s excellent The Fawcett Connection), moody disco breaks (Flashbaxx), afro-funk (Abayomy Afrobeat Orquestra), pounding tropical breaks (Souleance) and – er – something a little more house-related from the likes of the Leftside Wobble remix of the Ambient Jazz Ensemble’s Garden Of Earthly Delights. This latter is also one of two exclusives, the other of which, Simbad’s Detroit De Janeiro, is also of a very house-y persuasion. Best cuts are the already-Craig Charles-compiled Renegades Of Jazz Flaximus remix Brownout, Native Guard’s hypnotic afro-breaks beast Roots Down Low and the aforementioned Gene Dudley Group cut.
(Out now on Here & Now Recordings)