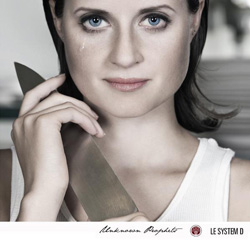 (PRESS RELEASE) In the book “The Nasty Bits” the chef and writer Anthony Bourdain refers to System D – the MacGyverish, git-r-done, don’t look too closely at how many eggs got busted in pursuit of an omelet approach that professional cooks use to get dinner on the table, no matter what. The foundational Minneapolis hip-hop group Unknown Prophets took System D as their title for this album, their fourth album, and first since 2006’s The Road Less Traveled, and so present this 11 course prix-fixe meal designed to satisfy the deepest hungers. Like the hunger in rap for musicians who can play their own instruments – when Jay-Z called for hip- hop to pay attention to bands like Grizzly Bear he had no way of knowing that at that very moment MaD SoN was composing this album on guitar. And the hunger of Big Jess to use rap to address more than bling and shopping, to take on existential issues like the propensity of the universe to ignore us, or as he says in track 6, “Don’t you ever feel like screaming/at the top of your lungs for no reason/in the middle of a crowded place/and people stare at you like you’re from outer space…” In restaurants they call cooking that incorporates the influence of many cuisines Fusion; If Le System D was a meal you’d call if a Fusion of underground dance artists like the Avalanches (see track 5 for more on this), hard rock, and swift, playful elegant rhyme in the style of early Eminem, but in Big Jess,Willy Lose, and MaD SoN’s hands this fusion cooking is far more than the sum of its parts, it’s a new cuisine, an unforgettable meal, a satisfying repast that proves that it truly is far better to have a meal prepared by chefs who have been kicking around the kitchen enough to know their way around a knife. – Dara Moskowitz Grumdahl (Food Critic for MN Monthly/Editor-in-chief Real Food)
Hate Face, the lead single from LSD, features the Seattle-based rapper Grieves- recently featured as MySpace’s Indie Artist to watch for. The song is a “love gone bad” break up song with a killer hook and a catchy melody. Doomtree powerhouse producer Lazerbeak and newcomer Chickenbone trade production licks with Big Jess on the instrumental cut “Tap Dance.” The song “Forever” features Swedish MC Promoe of the Swede Grammy winning group Looptroop Rockers. “Fresh” is another warm weather anthem featuring South Minneapolis’ own New MC and the beautiful vocals of Alicia Steele. Portland based rapper Braille lends his skills to “Explore”. “What I Live For” set to be the second single from LSD, is another catchy track that lends it’s inspiration from the long and cold winter months here in Minnesota.
Unknown Prophets will hold their CD Release Party at First Ave in the Mainroom on Thursday, December 3rd. Joining them will be the artists on the “Strange Journey” tour; Kentucky based hip hop wonders the CunninLynguists, Looptroop Rockers, and Grieves. With DJ Anton and DJ Espada on the tables to keep the night moving to a groove.
Made from scratch; a truly homemade album of natural freshness and awesomeness!!!
Album Release Date: 12-01-2009
Unknown Prophets – Le System D – tracklist
1.Bleeds & Sweats
2. Forgot You Were Human
3. No More Hell
4. Hate Face* (feat. Grieves)
5. Tap Dance (feat. Lazerbeak & Chickenbone)
6. Explore (feat. Braille)
7. Stand Our Ground (ft. Brent Snyder & Anneke Kampman)
8. Face The Storm
9. Fresh (feat. New MC & Alicia Steele)
10. Forever** (feat. Promoe)
11. What I Live For**
(hidden track #13 Dangerous)
*Lead Single
**Other suggested singles

Posted on 18th November 2009 no comments