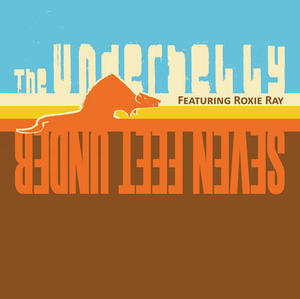 Pushed for time once again, this week’s guest review style had to be that of Rolling Stone magazine. Have you seen them? Christ! I’ve written longer notes in the mist on the shower door. Any way – here goes:
With a name like The Underbelly you might expect Seven Feet Under to be an exploration of the seedier, darker side of funk, especially given the graveyard connotations of the LP title. It’s something of a surprise then, to find out that this Cornish ‘deep funk’ band’s LP is shot through with jazzy stylings (e.g. Re-use Me) and even the odd stab at something bit more Afrobeat in (funnily enough) a track entitled Afrobeat. There’s no doubting that The Underbelly’s playing is tight, but it is so to a fault. It seems like these guys heard Archie Bell & The Drells instructions about playing on point by doing “the tighten Up” literally and played sphincters clenched for the duration of the recording session. My shoulders kept tensing involuntarily while I listened – even during first track Vfunk – and I quite liked that one. And another thing: enough with the saxophones already – tenor sax, alto sax and baritone sax – good god! These were used to such devastatingly (acid) jazzy effect on Re-Use Me I was waving a white flag by the middle eight. Couple that with good but generic singing by Dojo Cuts’ Roxie Ray on three numbers here and I was pondering getting my shovel out. True, I am not the world’s greatest fan of either the saxophone or anything jazz-funky in the slightest (unless it’s a Blue Note original) and Seven Feet Under might be up your street if you like jazzier moments of The Apples and Laura Vane & The Vipertones (or, god help us, 90s acid jazz) but my advice to the band would be – smoke a massive bifta, slow the fuck down occasionally and give that guitarist his head. He’s good.
(Out now on Record Kicks)

Listen to The Underbelly – Seven Feet Under