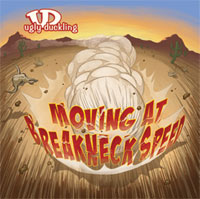 As previously announced on MB back in February, Long Beach old-school hip-hop crew, Ugly Duckling, have been in the process of working on their fifth studio album, Moving At Breakneck Speed. According to their brand new website www.uglyduckling.us, it will be released in October this year. The record is a 14 track concept album described by UD as, “an exciting and musically exotic adventure story that has our desperate heroes circling the globe to outrun an evil gang of super-criminals determined to put an end to UD once and for all.” Given that their last concept album (2003’s Taste The Secret) is arguably, of all their releases, the one most laden with dancefloor bangers to date, this bodes well. Having already heard the surefire club hit that is Elevation (video on its way) as well as Sprint and Keep Movin’ you can rest assured that the style remains resolutely upbeat (check the Looney Toons-style cover artwork), the beats sample-packed and the mode fresh. It’s going to be a good autumn. Please let it drop on vinyl. Tracklist below…