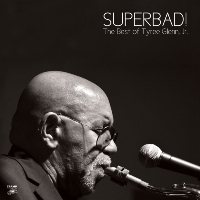 Never ones to forget the punters while they take a well-earned, annual summer break, Tramp Records make sure things stay funky as well as sunny until they’re back in the driving seat with the release of this retrospective of the career of Tyree Glenn Jr – Superbad! The Best Of Tyree Glenn Jr.. And if that name sounds a bit familiar, it’s possibly because father, Tyree Glenn Sr., was musical director and trombonist for Louis Armstrong and also played with Cab Calloway and Duke Ellington. Not that Tyree Jr. doesn’t possess considerable chops himself, having played sax since the fifties before embarking on what was clearly such an enjoyable sojourn in Europe in the early seventies (playing professional basketball in Lisbon, playing music in Italy with Rocky Roberts (the man who sang the Luis Bacalov-penned theme to spaghetti western, Django) and finally winding up in Germany) that he never left. It was around this time that he played live with Brain Damage (no, not the thrash metal band) and it is four cuts from that gig which make up the first four tracks on this LP.

And as energetic Kool & The Gang instro opener Kool & The Gang shows, Glenn certainly didn’t pull any punches on stage. Joe Tex cover Ain’t Gonna Bump No More which is up next is arguably even more pneumatic though a slower, stanky version of War’s The Cisco Kid betters both. Nor is that the end of the covers for Glenn also does justice to his take on the minister of the new new super heavy funk’s very own Superbad and just for jollies – Marler Eintopf – a German-language version of King Curtis’s Memphis Soul Stew – “Wir verkaufen so viel davon dass uns die Leute fragen was wir darein!” Lest you think it’s all covers, the set ends with a trio of Glenn-penned funk jams – the laidback S.O.S. – ripe for sampling as the basis for a neo-ATCQ type beat, the dirty electro-funk of Jealous Love and the uptempo loverman soul of Beautiful Woman. All that and if you lucky enough to cop one of the first three hundred vinyl LPs you’ll also get a bonus 45 featuring two R&B nuggets done by Glenn with The Fabulous Imperials – Hold My Hand and Yesterday. What you waiting for?
(Out now on Tramp Records)