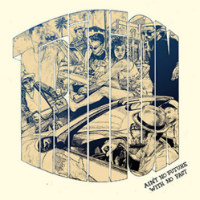 Feel the dancehall vibrations on Stop Igle as General G and the helium-voiced Miss Red bat the lyrical ball back and forth over a seismic skank courtesy of Trilion on the uplifting lead single off forthcoming Trilion LP Ain’t No Future With No Past. All personnel concerned hail from Haifa in Israel although, so pronounced is the lilting patois of the vocalists, you’d be forgiven for thinking they were based somewhere a little more Caribbean. Still, it’s not so much where you’re from as where you’re at, right?
(LP out 1 June on Scotch Bonnet Records)