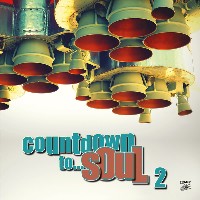 And so begins the countdown to Countdown To Soul 2 which drops very shortly and is the second volume in yet another Tramp Records funk and soul-oriented compilation series that began in 2017 with Countdown To Soul. As the monkey noted back then, it’s not like the label is short of irons in that particular fire – their other series Movements, Praise Poems, Feeling Nice and Santa’s Funk & Soul Christmas Party are up to eleven, eight, four and three (soon to be four) volumes respectively. Indeed, it’s not like the scene itself has been short of such compiled material since the deep funk revival that kicked off in the late 90s. What’s also the case is that the longer you’ve been digging, the rarer it gets to find something on which the best tracks aren’t ones you already have on 45, original LP or compilation LP. So can Tramp still deliver the goods? That’ll be a ‘Hell, yes!’ from the monkey then – for Countdown To Soul 2 is rich in soulful funky nuggets.

In the PR blah, Joel ‘Lucky Brown’ Ricci suggests the set for this one has been loosely organised into four sub-generic sections of soul, one for each side of its double vinyl content: the funky one, the Hammond one, the horns one and the anything goes one. As far as the monkey’s concerned though, you can find funky shit on all sides – and of the super-rare kind to boot – since if you don’t already know, Tramp specialise in re-introducing to the world mega-rare cuts and stuff originally only privately pressed.

But let’s get down to the music. Opener Don’t Rip Me Off, is a low-slung seventies funky chugger on which Tenison Stephens pleads for equality followed by one of the funkiest cuts on the whole thing – Leontine Dupree’s funky soul party bump Standing On His Word – and then Frankie Staton and Speckled Rainbow’s psychedelic soul organ-based groover Love One Another. It’s an impressive introductory trio but if you think that’s all this one’s got and the rest is filler, you are sorely mistaken. Joe Washington & Wash’s Blueberry Hill is a squelching, popping slab of seventies funk for example and Reno & The Chosen Three’s Soul Bagg is about the rawest and stankiest that a drum-heavy slice of funky organ-led R&B can get. Consider also Hammond groover ‘Untitled’ by ‘Unknown Organist’ – very much one for the mods and evidence of how deep these guys dig. If anyone knows what such a track is called and who did it, Tramp do, and if they don’t, that info. is now lost in the mists of time. It’s not the first such example included here either and the second one is even better – more about that in a bit. Marva Josie’s I’m Satisfied is a gorgeous slowly-building funky soul groove followed by one of the monkey’s two favourite cuts of the set – Shirley Wahls’ stone cold funky soul banger Tell The Truth. And yes you do wish you’d picked this and the Leontine Dupree number up on 45 when Tramp put them out a year or two ago. Are we done? Hell no! The monkey can’t resist copping you to one more really special treat before leaving you to discover the rest yourself and that’s the second cut by an unknown artist though we do have a title for this one – Damn You Sheriff Black. One of Lucky Brown’s aforementioned final side curveballs, this one is a hard-hitting ballad that could be filed under the made-up genre of ‘country funk.’ It occupies the territory somewhere between Bobbie Gentry’s Ode To Billy Joe and Mary Jane Hooper’s funky take on Harper Valley PTA and just as capable of making the hairs stand up on the back of your neck with a tale of a murdered country girl and a sheriff who could care less. It’s an absolute treat to discover and a great reminder of Tramp’s role in the curation of staggeringly good music that would otherwise be lost, over the years. Get on it!
(Out 7 October on Tramp Records)

Posted on 2nd October 2022 no comments