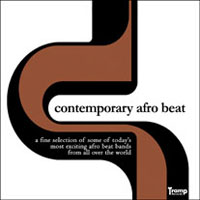 Hot on the heels of a superb compilation of the back catalogue of original Texan funkers Soul Bros. Inc. and the release of the hot debut by mod-beat outfit The Qualitons, Tramp Records’ label boss Tobias Kirmayer continues in his quest to cover all funk/ soul bases with this comprehensive overview of the contemporary afro-beat scene. Everyone knows that things pretty much kicked off with Nigerian legend Fela Kuti back in the seventies, (hell – he’s so famous there’s even a Broadway musical about him) and on the evidence of this, they’re still in rude health, even if Fela himself is playing at the big festival in the sky. There’s plenty here to get your teeth into from the organ-led, big horns riffs of opener, Crache Le Douleur, to the ten minute afro-groove epic of Odu’s Afrobeat Principles #1 . It’s a proper organic rhythm-fest – akuba and shekere all over the place. No vuvuzelas though. Just in case you were wondering. Press release and full tracklist below listen link.
Listen to – ‘Contemporary Afro Beat’- HERE
(Out 14 February on Tramp Records
(PRESS RELEASE) (Introduction by Tobias Kirmayer) This, the third volume in the ‘Contemporary…’ series is indeed very special as it is simultaneously the tenth album released on Tramp Records. When I founded the label in late 2003 I did not know that I would still be in the game eight years later and though the uncharted waters of today’s music business have been turbulent, this ship sails on.

I will continue to guide this label because my passion and desire is simply to spread honest music of independent artists. This is what I have always done with Tramp and I am very proud of every Tramp release. While at first Tramp stood especially for Funk and Soul, my interest in related genres progressed. Now, diving into the Tramp catalogue, you will encounter every shade of soulful music: Latin-Jazz, Afro Beat, Modern Soul and everything in between.

A very important detail for me is the organic and authentic sound of the music of the 1960s and 70s. Some people say it is old-fashioned to emulate the greats of this period. I do not agree with that at all. Being influenced by the music that was recorded in that period is not copying a particular style but preserving the atmosphere, mood and feeling of a ‘Golden Era’ in Funk, Soul and Jazz music. The analogue recording technique gives the music a human touch. This authenticity is very difficult to achieve with only digital equipment. The idea that music must sound ‘squeaky-clean’ is simply ridiculous. What of the more important elements of good music: vibe, groove, flavor, and style?

Finally, Thank YOU. Tramp exists to serve the needs of the music lover who is hungry for new sounds and new discoveries. Every time you purchase a Tramp release, you are casting your vote for a world in which independent ideas and creative artistic vision flourishes from the underground.