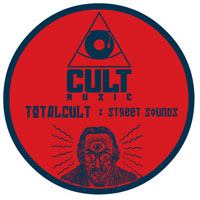 It’s been pissing with rain for twenty-four hours, VAT’s been raised to its highest rate ever and petrol’s so expensive you’d be better off pimping your ride to run off 21 year old Chivas Regal. As if that’s not enough, the fucking bankers are getting bonuses when they still bastard well owe us a shitload of money. Apparently unfazed – despite all these indications that the end times are upon us – DJ/Producer tOtALcULt has managed to keep a few spare rays of sunshine handy. Six to be precise. Five of these make up his rather good, super-ghettofunkin,’ disco-hip-hop-breakin’ Street Sounds EP which sees him cutting and pasting beats and samples with the euphoric abandon of a man who parties in the face of the apocalypse whilst the sixth is the tOtALcULt remix of The Funktuary’s Sister Stand Up. Incidentally it is this last lil nugget that, with philanthropic generosity, he’s making available for exclusive free download on monkeyboxing.com and which is chill-funky enough to make the four horseman pause for a shimmy. Nice work!

tOtALcult is a music producer and DJ from Birmingham, UK, with a passion for funky breakbeat and hip-hop music. With releases on free netlabel Fwonk* as well as NuFunk labels such as Booty Pirates, Pig Balls, Royal Soul and Boogie Boutique, tOtALcULt is quickly earning a reputation in the scene for tight production and funky fresh DJ sets. Through his monthly ‘Old To The Nu’ show on RAMP FM, the internet home of bigbeat and NuFunk radio, he has reached a world-wide audience of thousands, playing classic funk, soul and disco alongside the latest NuFunk and hip-hop tracks. tOtALcULt has also self-released music through his Bandcamp page and recently launched his own home page as a focal point for his free and commercial tracks, podcasts and mixes.