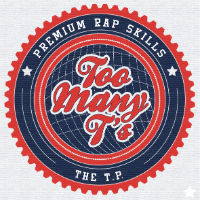 Let’s face it, too much UK hip-hop is all dour posturing and album covers on which grown men pull the facial expressions of a fifteen year old who’s just been bollocked for having his phone out in class. Time to welcome Too Many Ts‘ official studio debut release The TP then, as they firmly plant the flag of old school party hip-hop somewhere at the crossover between Aspects, the crafted foolery of the Beastie Boys and the cartoon rap of Ugly Duckling. The TP is a four-track stack of boom-bap that takes it all back to moving the crowd and will appeal to hip-hop heads, party breaks bandits and the ghetto funk crew alike – Can you hear that front to the back/ Pump up the track, hip-hop is back/ Hear that Boom-bap…. Hook-filled funky fast rap, swing hop, and two slices of Check Your Head fuzz – it’s safe to say that you can expect to hear this. A lot. Humble Juno player below for all four tracks – soundcloud audio to follow, videos for 1992 and It Ain’t Right (which you can already cop free HERE) below that and every indication that tomorrow you’ll be able to download it from the band’s Facebook page for a limited time only.
(Out 13 May on Drop Cat Records)