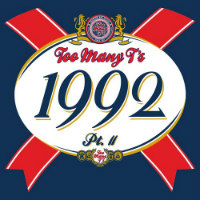 90s rap obsessives Too Many Ts‘ new single finds them revisiting previous single 1992 for Part II thus revisiting a track which itself stylistically revisits 1992. If you follow me. Where Part 1 was all about our lovable skinny white boys rhyming over funky breaks and loud guitars like it was the year of their birth (for their smooth and beardless chops suggest they cannot be much older) Part II finds them rapping over funky breaks and a flute loop like it’s the year of their birth. Skinny white boys rapping? Loud guitars? Flute loops? Reminds me of something…no, it’s gone. Don’t forget to play spot the old school rappers in the video. Incidentally, keen-eyed watchers may spot a trio of skinny white boys rapping on a roof in L.A. in 1989…Cop the single HERE, and watch the vid below. And don’t forget to thank them. Honestly – where are your manners?