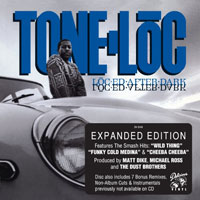 Let me see now – gravelly-so-laid-back-it’s-horizontal delivery? The immortal lyrics “So I gave some to my dog when he began to beg/ Then he licked his bowl and he looked at me and did the wild thing on my leg”? Must be legendary Sunshine State rapper Tone Loc. Yep, it’s another classic hip-hop cd release (amidst a slew of them this autumn) from Delicious Vinyl (there’s a certain irony there) and this time around it’s Loc’s too-frequently-dismissed-as-pop-rap classic from ’89 – Loc-ed After Dark. It was pure jealousy of course, you understand, since it yielded two million-selling all-time hip-hop singles – Funky Cold Medina and the Miami Bass-influenced Wild Thing with their tales of Loc and his sexual adventures in the Florida night. The truth is, however, that we’re not talking about two killers and lots of filler since the whole LP was, and is, hilarious and funky as hell.

There was also, for example, the respectably-selling third single I Got It Going On (of which you get both the original and remix versions on this release), fat as fuck opener On Fire and the Stevie Wonder sampling-Cheeba Cheeba. Hmm wonder what that’s about..? So to recap, that’s sex, drugs – oh yeah and heavy sampling (mainly – ahem – uncredited) of one Eddie Van Halen. Rock n roll too then – the trinity is complete. Did I mention the fact that it features some production by the Dust Brothers of Beastie Boys Paul’s Boutique fame? Naturally as this is a remastered, expanded edition it comes with no fewer than eight bonus tracks. Loc got it going on. Don’t sleep this time around.

Posted on 12th September 2012 no comments