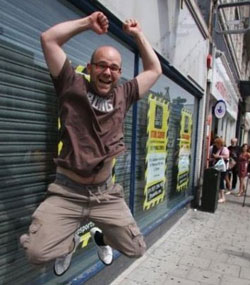 Tea Sea Records head honcho, rapper and producer, Tom Caruana has been making the finest quality beats for some years now straight outta Brighton – and it has to be said that the man’s no slouch when it comes to output. In the last year alone (that I know of) he’s dropped the cracking LP Rebel Without Applause with MC Elemental (featuring a Count Bass D hook-up), his own solo LPs It’s So Different Here (as himself) and Further Into The Woods (as Tom Bombadeal), remix albums for both Large Professor and Doom and production credits on both Boston rapper Insight’s most recent single True Or False and Koaste’s Billy The Kid EP. Amazingly, on top of all that and the fact that it’s Christmas – he still had time for a chat. Here’s what he had to say…
Monkeyboxing (MB): Tell us a bit about Tea Sea Records.
Tom Caruana (TC): I set it up in 2005 to put out various projects that I was working on. I had put some music out with other labels including Breakin Bread, Son and Fluid Ounce, but felt that I wanted to be in control of something that would let me put my music out when I wanted. The main starting point was getting the website set up, I could use it to sell CDs, post up free downloads, podcasts and have somewhere central to promote stuff.
MB: I understand Cup Of Brown Joy which you made with Elemental and which featured on the excellent Rebel Without Applause LP (released earlier this year) seems to have become something of a YouTube sensation. Have any of the trappings of fame been forthcoming as a result?
TC: I remember watching a rough edit of the video and thinking it was gonna be really good, but a few weeks after it was up on YouTube it went from hundreds to thousands of views in a matter of days! We couldn’t believe how well it had been received. On my website I can view how people arrive at the site and the majority of the traffic is via YouTube, so that’s the main impact on the label. I regularly sell Rebel Without Applause CDs around the world because of that one song/video.
MB: You get any contact off Doom after that remix LP you did of his stuff? He could do with some decent beats lately.
TC: I sent it to Count Bass D and with any luck he’ll forward it on to him. Not holding my breath though.
MB: Hip-hop seems to be suffering a major shortage of credible party-starting bumps at the minute both underground and overground – discuss…
TC: I don’t really keep up with things much, I keep looking back to old music. The recent hip hop albums that I like are the new Large Pro, Grand Puba, Raekwon and the new Method Man & Redman.
MB: Tom Caruana. TC, Tea Sea, Tom Bombadeal – are there any other aliases we should know about?
TC: Not really for me, but there is another project coming soon called The Eclectic Maybe Band which is basically me playing instruments and producing, it features singers and other instrumentalists. But no other specific aliases of mine, yet!
MB: What’s forthcoming on TC?
TC: The Eclectic Maybe Band, mentioned above, I have one album ready to go and another in progress. The 2nd Eclectic Maybe Band album will be the thing I am most proud of musically. I’ve got some more remix albums coming soon: Wu Tang, J-Live, Brand Nubian. I’ve got an album with Grand Agent that’s finished, it just needs to be mixed and mastered and will be out around April next year. Finally the proper Bombadeal album will hopefully be finished in 2010, but it relies on a lot of other people. ‘Further Into The Woods’ and ‘Songs From The Wood’ were just little tasters.
MB: Who would you most like to collaborate with?
TC: The whole of the Wu-Tang, but that’s cos I’ve been remixing them loads recently.
MB: Any shout outs or last words?
TC: Keep Boxing Monkey boy!

Posted on 30th December 2009 no comments