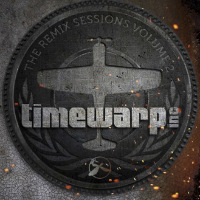 Timewarp Music’s bossman, Timewarp Inc. gets on a massive nu disco tip for a second volume of remixes drawing heavily (but not exclusively) from the large roster of Timewarp artists and sprinkling some his production disco dust all over a ten strong array of cuts. Among those getting the T.I.-treatment are the likes of Zamali, Danny Massure, AfroQBen, Vida G and The Worldstylers. Material includes all manner of four-to-the-floor shenanigans from the practically house-y to the decidedly funky. Regular readers should be able to work out which end of the spectrum is preferred at MB Towers. Let’s just say it’s the deadly remix duo of squelchy wah-heavy Dogo Argentino cut Badly and the more ethereal Zamali number Blue Mountains that are getting the most rotation.
(Out 30 March on Timewarp Music)