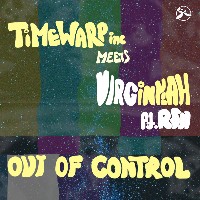 If it doesn’t seem like a minute since Timewarp Inc.’s last drop, maybe that’s because it hasn’t been. Nevertheless, here he is already with the follow-up, a remix of an RSN-produced track by Virginyah from the spring. As with the original and his own previous release Dubshine, Timewarp sticks with the reggae for his version of Out Of Control and is manifestly in charge of proceedings taking Virginyah’s vocals and a small loop from the original beat to rebuild things his way with a more energetic bassline and an altogether less stoned approach. Aside from the full vocal version, the track also comes with instrumental and dubstrumental versions – the latter of course making much of the echo. Echo. Echo. You get the picture.
(Out now on Timewarp Music)

Posted on 19th December 2021 no comments