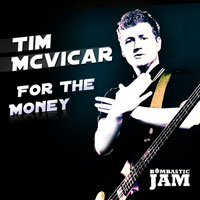 Smoove & Turrell’s live band bassist, Tim McVicar, steps out from the shadows cast by neo-northern soul’s unlikeliest but most deserving stars with his first breaks tune. Despite this release’s title, one can only assume he does this less for the money in these days of free downloads, illegal downloads and tinny, piss-weak ‘I converted it from a Youtube video’ mp3s, than for the show. Thus it is that the breakbeat-underpinned ‘Charleston’ first third of the track segues into a hammer synth/ Blue Suede Shoes-sampling second act, gets a high-pass middle eight and all comes back together at the end for the finale. Can you imagine the hybrid ‘jazz-hands’-Elvis-hip-shake-booty-grindin’ dance this is going to prompt amongst drunken revellers? They’re going to look like they’re shitting their insides out. It’s all Tim’s fault. CMC & Silenta and Busta on remix duties.
(Out 18 July on Bombastic Jam)

BJ 020 Tim McVicar – For The Money by Bombastic Jam

(PRESS RELEASE)
Tim McVicar has been cutting it up all over the world as bassist in funk soul sensations Smoove and Turrell and decided he wanted to start taking the dancefloor destroying excitement he experiences in the band into his own hands and start creating his own brand of beastly bangers.Bombastic Jam presents his Debut single “For The Money” a swinging Funky Break tune with having sampled the king of rock Elvis!