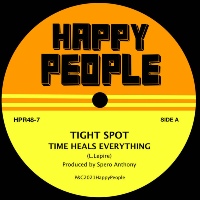 Time for a sweet slice of L.A. boss reggae and no, it’s not from The Aggrolites, but their all-female contemporaries Tight Spot. That’ll be Time Heals Everything then, an energetic paean to lost love originally recorded in 2003 but never previously released – due perhaps to the band’s short-lived existence. Better late than never though and it’s the UK’s Happy People Records who have stepped in to do the decent thing as part of their blistering release schedule which has included (among multiple other releases), drops from Malandro Nine Five, The Loving Paupers and Roger Rivas who is from The Aggrolites. The 45 features the vocal-free version on the flip. Only
(Out now on Happy People Records)
TEXT COPYRIGHT: Stone Monkey/ monkeyboxing.com (2021)

Posted on 4th September 2021 no comments