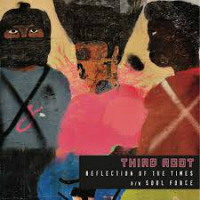 Next up from Dinked Records is this tasty seven inch hook-up between the label and Texas hip-hop outfit Third Root featuring two of the dopest cuts from the latter’s Libertad album. The crew consists of ‘black and brown’ members Easy Lee, Mexican Stepfather and DJ Chicken George whose lyrical reflection of the times on A-side – er – Reflection Of The Times hits hard over funky organic beats and a sung hook with clear roots in Hispanic melodies. Over on the flip is posse cut Soul Force where the trio are joined by Da’Shade, Riders Against The Storm, Bavu Blakes and Vocab on a beat that channels The Last Poets (not to mention lyrics that namecheck the New York group) as they fight the power.
(Out soon on Dinked Records)

Posted on 12th September 2017 no comments