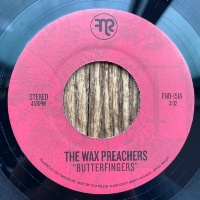 If you like the sound of raw, vintage funk, then hold on to your hats because this double 45 drop on Funk Night Records provides four righteous slabs of that stanky ol’ stuff from The Wax Preachers!  Covid (of course), got in the way of the simultaneous release originally slated for last year but luckily the label has finally managed to overcome issues reaching the mastering engineer, issues at the pressing plant and very possibly a catastrophic fire at one of only two places in the world that produce vinyl master lacquers. In terms of the band’s sound, think the likes of both Carleen & The Groovers (of Can We Rap fame) as well as the thunderous early Daptone stuff by The Mighty Imperials.  On the first 7″ you get the wah-wah and trumpet-driven chugger Butterfingers and the gritty uptempo b-boy groove of Adios Silver King while on the second there are shades of Jimi Hendrix and Curtis Knight’s Happy Birthday on Omaha with El Toro going uptempo again for fat Mex-funk car-chase thrills.

But what of The Wax Preachers themselves who seem to have come out of nowhere? Turns out the project was triggered by former hardcore/ DIY drummer Matt placing a Gumtree ad after his discovery of the heavy funk sound. Among those answering his call to arms were The Soul Grenades’ Milan and Smith & The Honey Badgers‘ Fergal McBride – soon to be on sax and bass duties respectively. Also joining the crew were guitarist Dave, percussionist Ray and eventually Smith & The Honey Badgers’ trumpet player, Flash. Cue the writing of five heavy funk tunes (four of which comprise those on these releases) and McBride sorting out the recording on his Tascam 424 MkIII 4 track cassette recorder. The end results were the sort of things that neither record companies nor punters think twice about before snapping up. Funk Night were on it like a car bonnet and (judging by the speed of sales at large online record stores in the last 48 hours), punters have been too. The pandemic forced cancellation of a slew of gigs for the fledgling band and they are amping to get back on the road. The unlooked for lockdown time did however provide ample time to lay down four more tunes at the end of last year though. Looks like we’re going to hear a lot more from these boys.
(Out now on Funk Night Records)