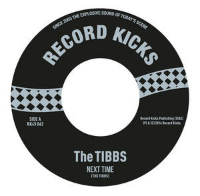 Record Kicks continue to unearth the talent with the discovery of The Tibbs. Well, I say discovery – this Dutch outfit have actually been around for at least three years though this is their debut single. Here for your aural delectation on the one side is bluebeat-ish bit of soul (or perhaps a soulful bit of bluebeat) Next Time while the flip features the more northern-leaning The Story Goes. And if you’re feeling this – keep your eyes and ears peeled for more from The Tibbs in the form of the debut LP, due later this year. Players and vid. below. Single is out on 1 April, no joke!
(Out 1 April on Record Kicks)