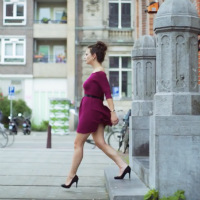 Holland’s hottest soul export, The Tibbs, have a second single out off their recent Takin’ Over LP, I see. That’ll be Dog Days then – a jaunty slice of Motown-ish rnb – apparently named after the hottest, sweatiest parts of August. Sounds like the perfect excuse to showcase the model looks of singer Elsa Beckman in no less than two skimpy retro dresses as she alternates between doing Audrey Hepburn impressions in a stage kitchen in the one and sauntering around Amsterdam in the other. Happily she manages to avoid both the red light district and certain ‘cafes’ of note although things look potentially ominous as she enters a darkened cinema. Luckily it’s only showing a grainy retro flick in which the female lead looks – er – a lot like Elsa Bekman. Happy days!
(Out now on Record Kicks)