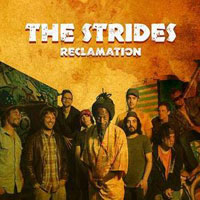 When I was at school ‘strides’ were what everyone called their trousers, as in – ‘liking the strides mate.’ At least, that was if they were drainpipes – if you were wearing anything that had the slightest bit of flap in it you were clearly some sort of hippie – why else would you be wearing flares? In the intervening years a ten-piece reggae, jazz and hip-hop outfit from straight outta Sydney have reclaimed (you’ll see what I did there in a minute) the term ‘the strides’ as their band name. Now the band are on the verge of releasing their second LP Reclamation on Italy’s Record Kicks label. As a promo you can cop the title track for free via the band’s page on the Record Kicks site HERE it’s on an edgy jazz-tinged, hip-hop number that, if you’re feeling it, might well have you commenting, ‘yeah, liking The Strides.’
(Out 14 November on Record Kicks)

(PRESS RELEASE)
Latest addition to the RK family THE STRIDES are set for the worldwide release of their new album “Reclamation.” First single “Reclamation feat. LTL Gzeus” is a pulsing piece of hip-hop mixed with reggae, with a hypnotic groove and hard-driving lyrics that will soon be hitting radios around the globe. Watch the brand new VIDEO by GGT below, and pay close attention – as a super special treat Record Kicks is putting this single in FREE DOWNLOAD exclusively here until Monday November 14th!