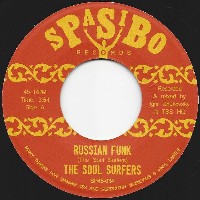 Russian funk nutters The Soul Surfers return with a new 7″ single shortly featuring tracks entitled – er – Russian Funk and Sirtaki. The first of these is a gloriously swirling uptempo psych-funk affair that pairs crunchy drum breaks with more traditional jangly Russian sounds – including a woodwind instrument which sounds suspiciously like a medieval recorder or something providing a solo, I shit you not. Talking of not shitting you – that B-side Sirtaki – er – that’s not a funk cover of the infamous Greek dish-breakers anthem is it? It is! One can only begin to imagine the kind of dancefloor carnage that will ensue as punters segue from a gentle sway at the start to a crazy pogo by the end of the track, having raided the djs record bag and launched priceless vintage 7″ funk missiles to their doom at the far end of the dancefloor along the way.
(Out soon on Spasibo)