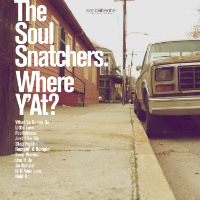 Dutch funk-soul crew The Soul Snatchers alternate between smooth seventies soul and raw sixties funk on third LP Where Y’At which is out this spring. The LP, sporting a suitably washed-out kerbside view of Soul Street, Skid Row, Anytown, U.S.A. offers a twelve track mix of both instrumentals and vocal cuts, the latter of which find both Curtis T. and special guest (the aptly named ‘Dutch James Brown’) Jimi Bellmartin making appearances.

The PR makes much of the band’s love of the New Orleans funky soul sound and the influence of their visit to the city in the years since last LP Scratch My Itch, yet while opener Humpin’ And Bumpin’ has the horns and the grooves there’s a JB’s jazziness to it. Second track, Foolishness, marries jazzy horn harmonies to rawer vocals and even third track Little Love which opens with the swampy clatter of claves, and lopes along with a voodoo groove finds plenty of room for the sort of sax action you might not associate with NOLA funk. So it’s not really until you get to fourth track How Ya Do It that the raw properly comes through. It’s the final third of the LP where the real highlights hang out however. The massively Dr John-ish vibe of Keep Workin is the first in quartet of LP highlights that also include Sly Stone homage and pastiche Just Like Sly, torch song Hold On and irresistible Charles Wright pastiche Stop Fightin’ – all of which make it pretty clear where this lot are at.
(Out 3 March on Social Beats Records)

Posted on 24th February 2016 no comments