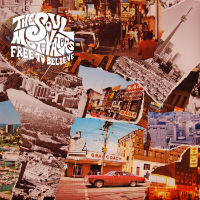 Summer’s over, festival season is finished and it’s serious autumn album release time – which is probably why Toronto’s The Soul Motivators have decided to make their mark with debut LP Free To Believe. The band feature a core of keys, bass, guitar, drums and percussion but rather handily they also possess a three-piece horn section and, when the occasion demands it (which it mainly does), a female vocalist in the form of Lydia Persaud.

Free To Believe is a ten tracker on which the best tracks also highlight the variety on offer such as the odd blaxploitation-esque instro (the rather good Street Level which combines filthy fretwork with ambient police sirens), a soul torch song (Still Waiting) and some nifty Bamboos-ish funky soul such as the chunky La Garonne which presumably isn’t a tribute to the French river which flows into the Gironde round about Bordeaux way. There’s even time for a Stovall Sisters cover in the shape of Hang On In There. A number of reasons which might motivate one to purchase a copy, then.
(Out now on Do Right! Music)

Posted on 21st September 2015 no comments