THE SOUL CHANCE feat. WESLEY BRIGHT: Who Could It Be? 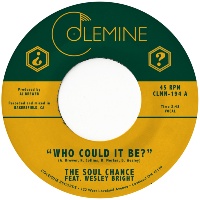 Yet another example of some top retro reggae floating over from Stateside this year is this nugget from Cali crew The Soul Chance who’ve teamed up with Ohio singer Wesley Bright to produce the particularly soulful boss reggae number that is Who Could It Be? This single follows the band’s self-titled LP from last year which was filled with rocksteady and early reggae-style cuts while Akron’s Mr Bright has previously been making musical ripples of his own with band The Honeytones. Of course Colemine Records was all over a Soul Chance/ Bright collab. and have done the decent thing as part of their weekly 2020 single series ‘Brighter Days Ahead.’ The single only appears to be out on digital though – at least at the minute – but since the cover art depicts a 45 label, perhaps brighter days truly are somewhere just ahead.
(Out 25 September on Colemine Records)

Posted on 25th September 2020 no comments