THE SOUL CHANCE feat. WESLEY BRIGHT: Who Could It Be / Goodbye (Vinyl 7″) 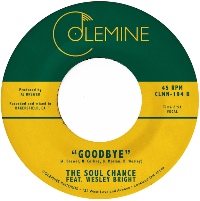 The first of two retro reggae releases due out on Colemine Records next month is 7″ single Who Could It Be b/w Goodbye both sides of which are collaborations between California’s The Soul Chance and Ohio-based singer Wesley Bright. Who Could It Be? was initially released on digital format in autumn 2020 and found the parties concerned taking a boss reggae path. They follow a similar stylistic route on Goodbye, though if one were to be pedantic, one might argue this is less the ‘sound of ’69’ and more evocative of the nebulous period around ’72, ’73 when the sound of early reggae was beginning to splinter – roots in one direction, lovers rock in another. Think an early seventies cut produced by Leslie Kong and you’re ballpark at any rate. Either way, what you’re getting from both cuts is a beautiful evocation of another era.
(Out 11 February 2022 on Colemine Records)

Posted on 6th January 2022 no comments