THE SLINGSHOTS: Break Out! 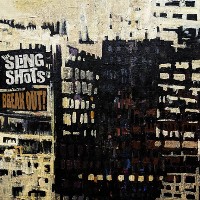 ‘Is This Soul?’ Barcelona’s The Slingshots asked on their 2014 debut LP and the answer from the monkey was a very much an affirmative. Fast forward eight or so years and they’ve just dropped their latest release – four-tracker Break Out! on which you’ll be happy to hear that the soul is still very much in effect. The first half kicks off with Got My Own Time – a lilting uptempo affair with prominent keys and horns underpinning a self-affirmatory lyric followed by the slower, more smouldering funk of Me, I’m Fine.  In the second half, Just A Classic Guy is a horns-led stomper about a guy who’s running out of patience (or is he – that half-time bridge suggests otherwise) with a lover who can’t decide between him and someone else while the instrumental Chasing Marcus sets a blistering chase-theme pace for the closer – a sequel of sorts to Chasing Paquito off their first album. Break Out! is the first of two EPs recorded by the band during the pandemic.
(Out now HERE)

Posted on 6th December 2022 no comments