THE SCARLET PIMPERNEL: The Beast And The Beauties EP (2015) Ltd. Free download 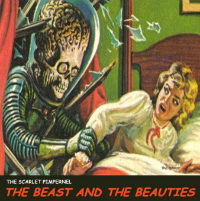 Next from The Scarlet Pimpernel after all those 90s rap remixes is this – his The Beast And The Beauties EP. Each of the three tracks contained thereon is graced by a different female vocalist (Jube, Sid M and Martha Cecelia respectively) so one assumes they’re the beauties and Mr Pimpernel is the beast whose beats are transformed from cinematic instrumentals into one dreamy slab of neo-soul and two heavyweight trip-hop nuggets – the second of which (The Way We Were) is a Gladys Knight cover. Also comes with a Huw remix of the JUBE-featuring neo-soul cut Ark and instros of all three but it’s the wah-trumpet-toting Sid M-featuring Love Phenomenal remix that captures the imagination best.