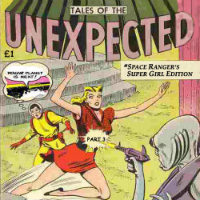 The man who put the ‘pimp’ into Pimpernel is back as Manchester-based producer The Scarlet Pimpernel emerges from his musical chop-shop having customised the work of Queen Latifah and Roxanne Shante in his trademark 90s style. Somewhat livelier than previous drops this one finds Roxanne Shante’s rolling Big Mama morphed into a crashing cymbalfest complete with sirens and stabs of 80s rock guitar courtesy of a certain man dressed in school uniform, while that sax is getting a hell of a foregrounding in a rerub of Queen Latifah’s UNITY. Naturally, it’s all about the Shante cut but then she ain’t about no games, she gonna start calling off names – first up is Latifah. She roll up and Shante gonna smoke that ass like reefer. Well – she is a big mama. Cop it below!

Posted on 14th September 2014 no comments