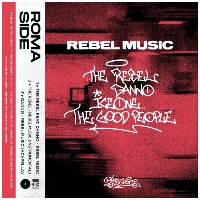 Blimey – a 12″ – remember them? They were king of vinyl formats for a while and ruled the clubs for nearly four decades until newfangled stuff like digital formats came along and and – er – the vinyl 7″ made a resurgence. Still, for disco and hip-hop, they were always the big donny dadda of formats and The Rebel knows what’s good for new release Rebel Music. Six cuts (yep, there’s a lot of space on two sides of a 12″) is what he delivers here to celebrate ten years since Rebel’s Choice started rocking basement parties in Roma which effectively is six different versions of his beat Rebel Music a.k.a. RM – also an abbreviation for the ‘city of seven hills’, fact fans. That would be a fat 90 bpm (and decidedly 90s-style) slab of boom-bap with neck-snapping drums, a subby bass groove, funky horns and dubby echo FX. First up on the mic is Danno, from the eternal city’s Colle Der Fomento crew, name-checking a selection of hip-hop’s great and good and he’s followed by The Good People who give proceedings some authentic NYC flavour on the version on which they feature. Also present are the Danno acapella, the instrumental, a remix from Ice One of The Good People version and the instro of that too! The Rebel provides – get on it.
(Out now on Four Flies Recordsnto darkness)