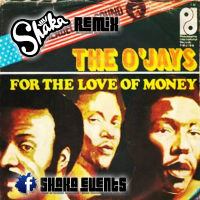 Some people (board sports types and VW camper drivers mainly) like to throw out a shaka. But what does a shaka throw out. Well, if it’s Glaswegian crew Shaka, the answer’s a ghetto-funk remix of much-sampled O’Jays classic For The Love Of Money. O’Jays singer Eddie Levert has previously complained at the way the original anti-capitalist message of the song and its title (taken from biblical aphorism “For the love of money is the root of all evil”) has been wilfully misinterpreted and adopted by feral capitalist greed-slags as some sort of rallying cry. Like being used as theme tune for the Yank version of business prickfest The Apprentice, for example. Still, being feral capitalists is hardly an accusation you can level at Shaka since they’re giving this away for free. The two of you who didn’t pick it up when it got ‘scoured’ by Spinforth recently can now cop it below: