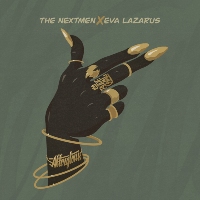 Here’s the new Nextmen single then, on which they get cheeky with Wilkinson’s 2013 cut Afterglow and re-boot Rude Boy, the best track off their 2018 LP collaboration Pound For Pound with Gentleman’s Dub Club. If you’re familiar with the original of Afterglow, you’ll know it for a pop-oriented slice of D&B. In the hands of The Nextmen however, it becomes a warm dub reggae affair topped with Eva Lazarus’ uncontrived vocals. Perhaps trumping even this though is Rude Gyal. Once a riddim featuring vocals from Gardna, The Nextmen simply remove his contribution and replace it with Lazarus for a ’21 fem-spin and a second equally dope version of the track. One time for the gyal dem!
(Out now HERE)