THE NEW MASTERSOUNDS: Can You Get It (2011) – Free download + ‘Breaks From The Border’ ‘making of’ video 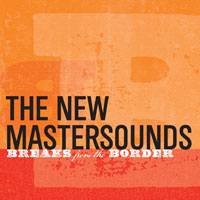 News just in from MB’s Dutch connect (and one half of The Shakedown DJs, Zephirnl) that UK funk legends The New Mastersounds are back with a new album Breaks From The Border on 9 August this year. Not only that but you can cop a FREE DOWNLOAD of bumpin’ NEW TRACK Can You Get It in advance of that via US radio station XPN. Not for the first time, the band invoke the Meters though this is more of a late-era Fire On The Bayou style vocal cut. Apparently they had a choice about whether to record in their hometown of Leeds or a studio in Texas. No contest really but unfortunately fate intervened forcing the band to head stateside and one can only sympathise with their having to endure such hardships as continual sunshine and decent steaks. Check back in with the monkey for more on Breaks From The Border soon.

(PRESS RELEASE)
The New Mastersounds will be releasing their first ever US-recorded album, ‘Breaks From The Border’ this Summer. ‘Breaks’ marks a new era in the band’s sonic landscape by topping their unique syncopated grooves with group vocal styling. Band tested, fan approved. Check out a glimpse of behind the scenes in Tornillo, TX of the making of ‘Breaks From The Border’ in this exclusive video created by Ben Mears and Christopher Doody for amodernlove.com.