THE MIGHTY MOCAMBOS: The Take Off (Ltd. vinyl 45) 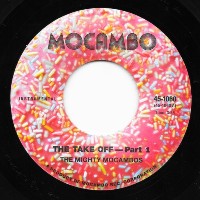 Get excited and buckle up for the take-off, wax donuts fans, because that funky German powerhouse The Mighty Mocambos has another vinyl 7″ lined up for your delectation entitled – er – The Take Off Pt. 1 and Pt. 2. The instrumental A-side initially perks your ears up with an Ethio-jazz sax intro. which quickly gives way to a rock solid drumfunk groove laced with subtle wah-wah then more sax and percussion building until the guitars and sax properly have it out at the end. The flip picks up right where the A-side outro leaves off, as these things do, and before you know it, that whole sixties vocal A-side/ instro B-side model has been inverted and who should pop up but Mocambos mic spot regular Nichola Richards followed a short time later by NY MC JSwiss.  That’s a hole (see what I did there?) lot of dancefloor action!
(Out 11 February on Mocambo Records)

Posted on 11th February 2022 no comments