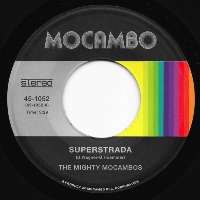 B-boys and girls get your skates on – the brand new Mighty Mocambos single, Superstrada backed with Concrete Stardust is just out on 45! Both tracks feature on the band’s excellent album 2066, from which this is the second single to be lifted. Having proven to be live favourites, both cuts appear on this release in extended form. Superstrada opens with a drumbreak and Assembly Line breakdown-style ‘Hahs!’ before bringing in the horns and sitar while the arguably even better Concrete Stardust blends traditional b-boy funk with retro-synth elements and a horns riff that a western would be pleased to boast as its soundtrack. What’s not to like?
(Out now on Légère Recordings)