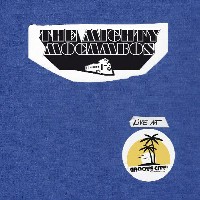 Here’s the the new single from The Mighty Mocambos then – Something’s Missing.
What’s missing?
No, that’s its name – Something’s Missing.
Yeah – you said, but what’s missing?
No!!! Arrghhh!
Hours of fun. It was penned by band member and singer Nichola Richards this one, apparently, for their live show in Hamburg’s Groove City record store. Yes – the place where they recorded forthcoming live LP Scénarios – off which this is the second single following last month’s Ghost Walk. Similarly uptempo, this one is a vocal cut featuring Richards, unsurprisingly, and features enough guitar chanks, drum pyrotechnics and big horn riffs to satisfy any funk fan along with being (once again) tighter than most band’s studio efforts. Something’s Missing then. Nothing’s missing.
(Out now on Mocambo Records/ Golden Rules)