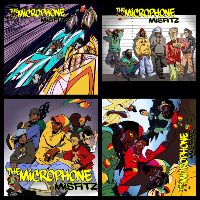 New material coming through here from Windy City hip-hop crew, The Microphone Misfitz, in the shape of their new Midwest Anime EP – a tribute to their favourite retro anime. And who doesn’t like retro anime? First up is Gatchaman‘s tribute to, well…Gatchaman – originally presented to kids in the English-speaking world in somewhat neutered form (i.e. without the violence, profanity, nudity and overtly transgender characters) as…Battle Of The Planets! This is swiftly followed by Cowboy, Lupin and Race Against Time which respectively pay tribute to Cowboy Bebop, Lupin The Third and Speed Racer. As with Gatchaman, the respective themes of each anime series are liberally sampled for the uptempo boom-bap treatment while the ‘Fitz emcees drop lyrics that reference the content of each series – albeit loosely enough to have more universal meaning. Battle Of The Planets fans may be disappointed to learn that it’s the original theme to Gatchaman that gets used rather the the stirring BOTP theme and there are no references to ‘going Fiery Phoenix’, how fit Princess was or the fact that Spectra commander Zoltar looked a bit girly. This is more than made up for by the fact that the production is dope, all tracks are b-boy friendly and Cowboy Be-Bop‘s theme tune was really dope in a sixties spy-funk kind of way.
(Out now HERE)

Posted on 2nd September 2020 no comments