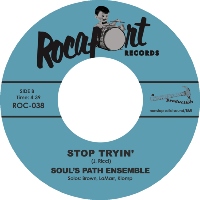 Unintentionally overlooked at the start of the month as the Covid chaos continued is this split vinyl 7″ from Rocafort Records featuring a brace of instrumentals – a cover of Willie Bobo classic funky jam Broasted & Fried by the L.B.s. backed with Soul’s Path Ensemble’s languid Stop Tryin’ on the other. Despite one occupying the party end of the funky spectrum and the other a more meditative space, they both have a jazziness that once characterised classic late 60s/ early 70s Blue Note releases as well as much output from the Godfather of Soul at the same time. But is that the only link between the tracks? No, it isn’t! The L.B.s are of course Joel ‘Lucky Brown’ Ricci’s band while Stop Tryin’ was penned by one Ricci, J. That’ll explain why the pair of them exemplify the very nature of the groove, then. The fact that this has already sold out on Rocafort’s bandcamp page suggests it may not hang around long anywhere else either.
(Out now on Rocafort Records)

Posted on 18th November 2020 no comments