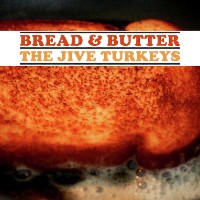 All the way back in 2010, Cincinnati’s The Jive Turkeys scored a pair of impressive firsts: the release of their accomplished debut long player for one and the fact that it was the first ever album release on label Colemine Records. The release in question was one which Colemine are shortly to re-release on vinyl and that is of course, their Bread & Butter LP – a twelve-track set of almost exclusively instrumental funk with a single slice of bluesy instrumental soul as the closer.

Two things come across loud and clear immediately: firstly, that the ‘Turkeys can play their funk; secondly is the debt that so many bands owe stylistically to The Meters. At times on this though, as with many contemporary bands who play in such a style however, that can mean imagining The Meters on amphetamines – blistering opener The Funky Turkey and Straight Fire being cases in point. And it also holds true (as with many contemporary bands who play in such a style) that the best cuts on this one aren’t the ones where funk is played at breakneck speed just because the band can. And this is why the slower (but still fairly brisk) aptly-named JT Strut is one of the stanky highlights as b-boy-friendly breaks, scorching organ, chanking guitar and loose-limbed drums are the order of the day. Also keep your ears open for the lithe funky chugger Bill Collector, arguably the most Meters-ish cut of all – Look-A-Py-Py-era Funky Brewster and the one non-funk cut – the aforementioned closer Otis Lament.

Posted on 23rd November 2022 no comments