THE IN SOUND COMPANY: Silk And Gunpowder/Our Tin Can Rocket (Vinyl 7″) 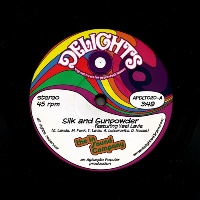 The latest addition to the mounting body of superb psychedelia coming out of Markey Funk’s Delights label is this new vinyl 7″ from The In Sound Company – and you know that ‘in sound’ is ‘wayyyy out’. The single is another collab. between Markey himself and RPS Surfers’ Shay Landa (like last year’s Oregano single ) with Silk And Gunpowder as the A-side. This turns out to be a guitar-led slab of crunchy psych-funk featuring a kanun (lending it a distinctively Eastern air) and Markey’s Polivoks keyboard layering the mood. On the other side you get Our Tin Can Rocket. This is a faster, funkier and atmospherically lighter affair that would be perfectly suited to, say, Flash Gordon being triumphant against Ming The Merciless in the lurid skies of Mongo – were Columbia Pictures ever visionary enough to invite Markey’s label to redo the soundtrack for a re-release.
(Out 25 March on Delights)