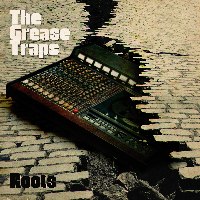 A game of two halves? One long song with two different halves for – er – the price of one? Whatever you want to call it, you’re definitely getting your money’s worth on new single, Roots, from Oakland’s deep funk outfit, The Grease Traps. The last song recorded for their Solid Ground LP, it is also that album’s opener and was recorded in a single take! Things start out with a stripped-back, loping funk groove, over which vocalist The Gata explores American racism in a soul-drenched falsetto. Around the two and a half minute mark however, the strings and fuzz guitar come in ushering proceedings towards an apparent crescendo. With this barely more than half way through the track’s five and a half minute length, you know there must be more to come – and so it proves as out of the dying fuzz comes a driving, uptempo, four-on-the-snare soul beat all the way to the end.
(Out now on Record Kicks)