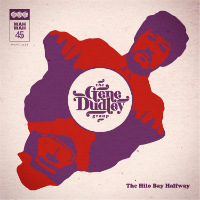 It might sound like a confidence trick or a number from the South Pacific soundtrack but The Hilo Bay Halfway is actually the new single off The Gene Dudley Group‘s rather good debut LP Saturday Shifting (released back in July on Wah Wah 45s) on which the authentic sound of tropical funk seems to have been captured by the north Londoner. Does this mean Nassau’s gone Finchley? Who can say? What I can tell you is that this release has also got the sticky fingerprints of label-man Scrimshire all over it. Both he and Dudley provide remixes, he’s also allowed Dudley to remix one of his own tracks Alignment. Whose single was this again? Oh yeah – Gene Dudley’s. Also comes with brand new Gene track The Mall Walk and will be available on wax as well as digital.
(Out 11 November on Wah Wah 45s)