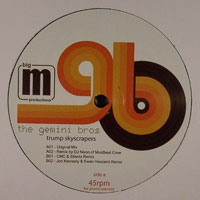 BigM’s latest drop sees The Gemini Bros deliver four-tracker Trump Skyscrapers. When I was a kid ‘trump’ was the word one of my mates dad’s used as a euphemism for a fart (bear with me – this is going somewhere) so you can imagine my amusement when I discovered there was an obscenely rich bloke called Donald Trump. Somehow it was appropriate. Anyway (coincidentally) he built a huge ‘mixed-use’ concrete phallus in NYC called Trump Tower (didn’t find out about that until years later – and it was still amusing) which Gemini Bros. seem to be referencing on what might be termed a ‘mixed-use’ EP. In the ground level atrium we have the filtered horns-plus-breakbeats of the original, DJ Nixon and Mustbeat Crew host an almost ‘northern jazz’ re-interpretation in the mid-level restaurant’s dancefloor and Jon Kennedy and Ewan Hoozami offer a minimal and druggy slice of breaks for the weird party in the top floor penthouse. It’s CMC & Silenta who have the most fun though in the basement club with their farty-bassed ghetto ragga rerub.
(Out now on BigM)

One Response to THE GEMINI BROS: Trump Skyscrapers (2012)