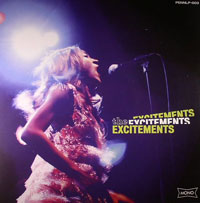 This album’ll be this year’s first full-length antidote to the slew of noodly-jazzy-white-boys-playing-funk-masquerading-as-‘deep funk and soul,’ and not a minute too soon. But – hang on – these songs aren’t original – they’re old soul/ rnb numbers by the likes of Little Richard and Barbara Stephens! Aren’t The Excitements just a covers band? Fuck off! They aren’t just anything. The arrangements are super-tight, the hooks large and they’re fronted by a bona fide soul sister throwback in the form of Koko Jean Davis.

Some contemporary female soul and funk vocalists lack the sheer power of original soul divas while others have the power but adopt ‘generic contemporary retro soul/ funk vocal style number one’ which is a pity because it sounds like someone trying to sound like they’re from another era rather than actually sounding from another era. There’s none of that shit going on here – Davis is the real deal: power, soul and an authenticity that rivals Sharon Jones’ but is easier on the ear. And she vaguely resembles a young Tina. In fact this has all the energy that the Jones and the Daptones have been missing since album number two. All right, so the rest of the band do look suspiciously like they might all be white boys but they’re anything but noodly or jazzy. Opener Take The Bitter With The Sweet is a belting uptempo rnb dancefloor stormer, I Do The Jerk will have mods of all ages wetting themselves with – er – excitement at it’s hard-edged beat guitar sound while Never Gonna Let You Go is a classic slow-burn(ish) torch song – to name but three.

The Excitements is the very definition of the word ‘raw’ in terms of soul and as real as it gets in the twenty-first century. As for the whole ‘covers’ thing – give them a chance – they only got together last year. If this LP doesn’t unite mods, northern soul boys and girls and funky soul commandos everywhere – I’ll start getting into jump blues or something. Barcelona then – it’s where soul comes from these days, apparently.

(PRESS RELEASE) Do you love elegant, sophisticated music with a feeling, as much as raw, gutsy, hard-hitting music? Guessing that you do Penniman Records takes great pride in introducing you to The Excitements, because their music fits into both categories.

They are an ALL NATURAL free-of-additives-and-preservatives R&B / Soul band. A band with both feet solidly planted on Memphis and Detroit, and with a heartbeat which is pure Chicago. To put it simply, The Excitements are what the doctor ordered: six dynamite musicians intent on bringing out the very best from Koko Jean Davis’ extraordinary voice, a voice which will either break your heart or astonish your ears, whatever Koko fancies the most.

The Excitements’ career is truly awesome. Their first gig took place in July 2010, and a month after that the band embarked on the first of their three recording sessions, their first Spanish tour and a series of concerts all across Europe. Very few groups can boast of enjoying such a critical success, selling so many 45s and capturing such a loyal following in so short a time. Their splendid first album, “The Excitements” – available on vinyl and CD – has been produced by the great Mike Mariconda – the only living man with a direct connection between his ears and his crotch.

Hearing is believing, and Koko and her partners are bound to mesmerize with numbers such as Nathaniel Mayer’s “From Now On”, Barbara Stephens’s “Wait a Minute” and Little Richard’s “Never Let You Go”, a track which will go straight to your heart. You may call them old-fashioned. A classic sound, if you wish. One thing is clear: the good stuff is here to stay. Stop reading, listen to The Excitements and hear for yourself.

One Response to THE EXCITEMENTS: ‘The Excitements’ – Album (2011)