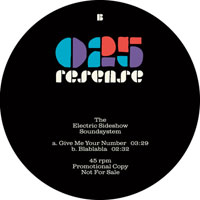 Meet The Electric Slideshow Soundsystem a.k.a Don Rogall and Earl Zinger. Their minds are clearly awash with crazy notions that today’s discerning clubber is after a brew of jazz, sixties rnb, and latin music with big beat production and a vocalist who sounds like a cross between that bloke from Yello and Ronnie Wood. And they might just be right. Give Me Your Number is a shimmying psychedelic bounce over which Zinger’s refrain is delivered with a exactly the balance of desperation and menace of an aging sex pest running a relentless numbers game on any young female in sight just before kick-out time at your favourite club. It’s an interesting counterpoint to the saxophone-led rnb stomp of Bla Bla Bla over which Zinger’s refrain is delivered with the throaty enthusiasm of a sex-pest much earlier on the same evening when the night is still full of female promise. Drop this when everyone’s pissed and they’ll all be giving you their number.
(Out now on Agogo Records)