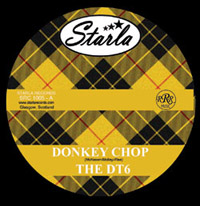 Starla Records continue their run of quality releases by delivering two sides of funky excellence on their latest drop from The DT6. Donkey Chop is an uptempo instro that’s all about the wah-wah and the flute while Scotstoun Shuffle employs what, on the evidence of this, are the wildly underused vocal talents of Average White Band Drummer Paul Mills. This one’s a nifty little mid-tempo JB style song-about-a-dance-routine effort. They’re not fooling anyone though – I’ve seen the ‘Scotstoun Shuffle’ and it ain’t pretty. Basically you stumble around the dancefloor with a can of McEwan’s in either hand bumping into all and sundry and the last one standing is a pussy. Or worse, English.
Listen to The DT6 Donkey Chop/ Scotstoun Shuffle
Starla Records
(PRESS RELEASE) The DT6 return with a heavy dose of Clydebuilt funk with the latest Starla 45, their third release so far. This time they’ve delivered an infectious guitar hook on top of a Hammond groover in “Donkey Chop”. The figure-hugging delivery of the DT6 horns together with a smattering of choice piano and flute lines add sophisticated flourishes to the heavyweight impact of the rhythm section.

On the flipside renowned American drummer Paul Mills (who has previously worked with the likes of the Average White Band and Daryl Hall) steps out from behind the kit to add vocals to a Glasgow-centric dance number “The Scotstoun Shuffle”. Named after the Clydeside area where a number of members of the DT6 reside, the ‘Shuffle’ echoes the dance-craze records of the 60s such as the ‘Popcorn’ and the ‘Tighten Up’. The dance-step instructions and a demonstration video featuring local dance groups will be coming soon.

“Donkey Chop” / “The Scotstoun Shuflle” is the fourth full release from Scotland’s Starla Records. The limited edition vinyl releases sold rapidly to a loyal following across the globe and found support from radio and club djs including Mark Lamarr (BBC Radio 2), Craig Charles (BBC 6 Music), Keb Darge, David Holmes and Snowboy. The label currently have a number of projects under way with a variety of artists including The Privates Hammond Orchestra, The Landellas, The Store Keys and Ray Harris & The Fusion Experience. Further information and more releases to coming soon.
…READ THE REST AT MONKEYBOXING.COM

Posted on 18th September 2010 no comments